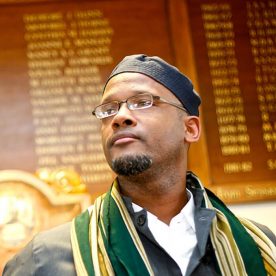 Ustadh Jamal accepted Islam in 1992 in Chicago, Illinois. He has a degree in Political Science from Southern Illinois University, and has studied Islamic studies in Damascus, Syria for 3 years. In 1995 he studied for 2 years at Abu Nur Islamic Institute and 1 year at the University of Damascus Language program for Foreigners. In 1995 Ustath Jamal moved to Tarim, Yemen and studied in Dar Al-Mustafa for 5 years. He returned to the US in 2003 and began an Islamic studies program that lasted for 1 year, and held courses in Fiqh, the 40 hadith, and beginning Arabic around the Atlanta area.

Ustadh Jamal was in the Dominican Republic, where he was working in the dawah and helping to develop the Muslim community in Santo Domingo. He was the Imam of Masjid Al-Hidayyah in Santiago for a year and a half prior to his return to the US. Ustadh continues to lecture in the UK and Latin America, and teaching at Islamic retreats and various classes in the Atlanta area.