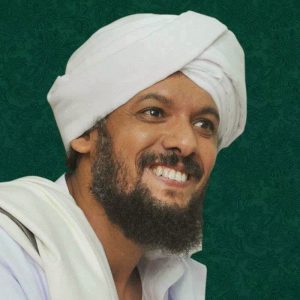 He was born in Tarim, in Yemen’s Hadramawt Valley in 1967. He memorised the Qur’an under the tutelage of Habib Sa`d bin `Alawi al-`Aydarus at the renowned school of Imam Muhammad Abu Murayyam. He also studied at the prestigious Ribat of Tarim and took knowledge from the main scholars of the city.

A highly-respected scholar, Habib Kazim is considered an expert in many areas of the sacred sciences including Jurisprudence (Fiqh), the Prophetic Biography (Sirah), Creed (`Aqidah), Principles of Jurisprudence (Usul) and in particular, Hadith and its related sciences.

Habib Kazim has made numerous expeditions calling to Allah. He travels regularly to South East Asia and the United Kingdom has visited Australia, Canada and several European countries. Wherever he goes, he touches people’s hearts with his compassion and humility. He stops at nothing to fulfil the needs of anyone that comes to him. His unique oratory fills the hearts of his audiences with love for Allah and His Messenger ﷺ and the desire to do good and benefit society.